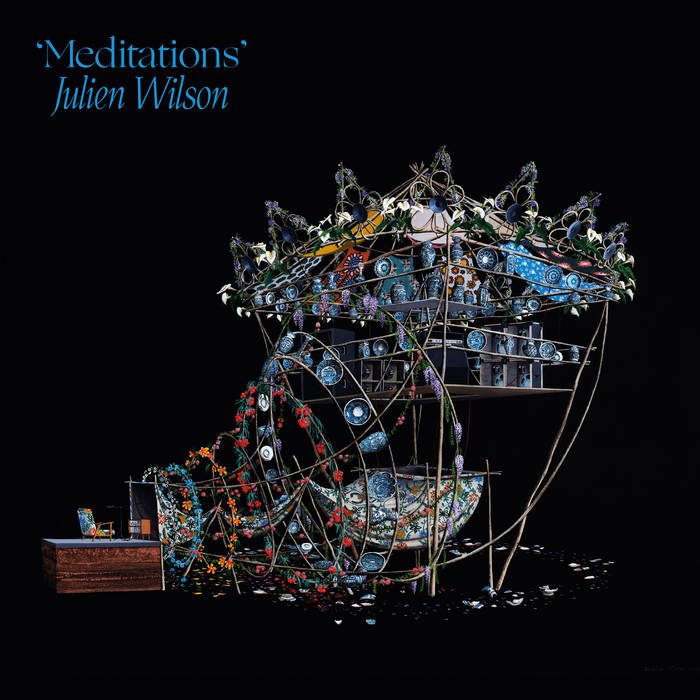 The most penetrating expressions of the human spirit arise not from desire, but from need. Desire is more playful, need more primal, the resultant work erupting as organically as perspiration. Julien Wilson created Meditations (and a partner album Mutations) during Melbourne's strict, protracted lockdowns amid the first waves of the pandemic, when solo recording was the lone outlet for a musician barred not only from performance, but even from private collaboration.

"I saw these improvisation sessions as a place of purity," says Julien, "and a return to the way I played music as a child, free from the constraints of genre or judgement. I aimed to approach each session without preconceptions and just be present, and let the music unfold at its own pace."

The remarkable thing about being truly present is that each moment becomes a period of infinitely elastic time if one can find a way to stay there, and here Julien fulfils the potential of each and every moment.

Interspersed through the album's first side is a tribute to fellow saxophonist/composer Mark Simmonds, whose death occurred during this project's creation. Were the pantheon of Australia's greatest jazz artists assembled in the night sky, Simmonds would be the blazing comet among them. No local musician of any stripe has ever played with more intensity – which wore Mark down to the point where he had to abandon public performance, leaving just one official recording, Fire, and a treasure-trove of memories for those lucky enough to have heard him live.

"I first heard and met Mark when I was 19," says Julien. "I was marked for life. His influence is profound. On the morning he passed away his ex- partner Lou called to tell me. I recorded a long improvisation/prayer session, and saved it as There Was a Fire. After whittling it down to three pieces I chose to rename them after [painter] Umberto Boccioni's [1911] States of Mind trilogy as they reflect this period of upheaval and alienation so strongly to me."

The titles used from that trilogy are The Farewells, Those Who Go and Those Who Stay, and Julien uses these pieces to embrace grief and love, simultaneously. The looping effect on the opening The Farewells conjures ghosts and other enigmas, while the foreground tenor also calls as forlornly as a gull that's lost its mate. Those Who Go has an ethereality of a sort I've never heard before: not that of choirs and angels, but rather a shimmering, almost rapturous luminescence, capped by a closing cry of anguish. Finally, Those Who Stay is a pithy summation of disquiet and desolation.

Julien's capacity for articulating conflicting emotions is deployed on Scrambler, Dip. “This was inspired by two amazing guitarists/composers/ audio wizards, Mike Gamble and Theo Carbo," explains the saxophonist. "While they physically inhabit opposite ends of the planet, they are spiritual brethren.” By combining raw breath with the percussive effect of striking the saxophone's keys, Julien creates an agitation that's laid against a backdrop of more buoyant lyricism. On Thirteen Reasons his soprano delivers a lament that soars free of idiom even as it flies far from self-pity, because the sadness is underpinned by resilience, while the sound itself is full of wonder and radiance.

The Long Game conjures the sparsity of isolation and the weirdness of displacement, yet, as ever with Julien's playing, any expression of melancholy, loneliness or even anger is coloured by his abiding sonic warmth. The impact is as close to directly communing with another human soul as art can contrive. To close the album comes the gentle optimism of Prayer for Tranquility. Light shines through this music – muted, like afternoon sun through a high window, and finally it quells the quiet desperation that has preceded it.

All tracks are recorded live with real-time use of pedal-effects, including the extraordinary array of sounds that evokes transition on Chrysalis: music that seems hell-bent on taking wing, but is trapped. Yet generally we hear the looping and other devices less overtly as "effects" than as environments in which the saxophone unfolds its stories, rather as birds sing in trees. And they are stories of fathomless humanity. JOHN SHAND

All tracks recorded in a single take with no overdubs in September 2020 except; Chrysalis, Emergence and the Long Game (December 2020); Prayer for Tranquility (October 2020)